skip to main | skip to sidebar

No, Viriginia, There Isn't a Santa Clause. Really. No Matter What the Man Says. Word. 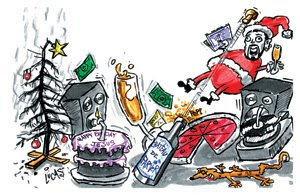 In keeping with the time-honored tradition of mainstream media re-running that whack "Letter about Santa Clause" every year by some obviously hallucinating young girl (yeah, right) named Virginia, I thought I would continue my own tradition, started in 1991, of running my own holiday missive. After 17 years, I believe it still speaks truth. So check back next year, I will probably do it again!
And Virginia -- if that is your real name -- get real.


Chocolate and champagne, romance with a zing, black lace and Nyquil, a whip with a sting, old movies and kitties and gold nipple rings, these are a few of my favorite things."


"God, I just love the old-time Christmas carols," I thought as I hummed my way into the unholy specter of holiday shopping. The scene? Christmas Eve. I had an hour left until the stores closed. I was armed with an ATM card, $3,000 in cash, a Black Centurion Amex and absolutely no idea of what to buy for anyone. But I had a song in my heart and a thermos of cognac-laced espresso on the front seat. The velvet-clad valet parking attendant beckoned. "What the hell," I said, grabbing my Santa hat and candy cane. "It’s all for a good Claus."

Ferreting out the truth
I bounded to the elevator below Neiman Marcus and hit the "up" button. The air filled with music. "Chestnuts roasting on an open fire ..." Ah, sweet thoughts of the Christmas Eve tree torching-to-come filled my mind.

Abruptly, the elevator opened and I was face to Shar-Pei wrinkle with a 140-year-old woman grappling with what appeared to be a large, beady-eyed ferret, or was it, oh no, a weasel, that was wrapped tightly around her neck. Thinking quickly, I grabbed the rodent and flung it to the ground. "Stand back!" I yelled. "It could be rabid!" Burying the heel of my Christmas Prada loafers in its skull, I felt the satisfying crunch of splintering bone. I held the poor woman close, out of harm’s way, as a pair of garish glass eyes rolled between our feet toward the cosmetic counter and the svelte pelt quivered She began to scream. "My wrap! My wrap!" "It’s all right, ma’am," I said. "Gift wrapping in on the upper level. Have a Merry Christmas!"

As I turned to make my way out of the store and into the holiday throng, it dawned on me that there were bunches of women wrapped in dead animal hides lurking all around me. Why, the entire store was filled with ’em! This wasn’t some Orwellian nightmare animal rebellion; these people were actually wearing fur. I was surrounded by hordes of dirty, rotten, stinking fur-skimos.

Ack! Ack! Phooey! Phooey! I glanced around furtively. Damn! There’s never a vial of fresh blood around when you really need it.

I could be Moses if I only had a larger staff
Christmas in the tropics is one thing, but Christmas at our house is another reality altogether. We face a clash of cultures, as Susan prefers the traditional, born-and-raised-in-the-Midwest approach. She puts on a happy stack of music, perhaps sweet dulcimer mixed in with a bit of Bing Crosby and soft piano, while preparing spiced cider and hot chocolate for our guests. She prefers to gather with close friends and family and decorate the tree with the handmade and heirloom ornaments we have collected, pausing with each ornament to reflect on its origin and reminisce on the fellowship and caring that the holiday season brings out in most of us.

Later, after the tree is finished and the piles of presents carefully arranged, after the train set has begun its never-ending circle cycle, champagne is solemnly sipped by all as plans for helping the less fortunate are discussed.

I, on the other hand, take a slightly less formal approach. First, I gut the garage and set-up a huge stage containing a completely robotic "Away in the Manger’’ diorama. The set includes a dozen anatomically correct farm animals, a 2,000-watt Star O’ David™ halogen spotlight, three full-size camels and a crib stuffed to overflowing with fire-retardant fiberglass straw.

My family and friends won’t be following the lights to just any old mangy manger. I proudly feature the ‘‘Baby Jesus of Nazareth’’ model, straight from the Franklin Mint’s Great Religions Signature series, equipped with a Holographic Halo-Head™ 3-D Son-O-God halo projection system, a Sign-of-the-Cross™ voice-box and a He-Heals-the-Sick™ holy hand gesture option.

After the wise men, and women, arrive, we gather together and all do multiple shots of chilled Grey Goose vodka, followed by my special homemade garlic, fresh tomato and artichoke pizza, washed-down with magnums of 1998 La Grande Dame champagne.

I’ve found that 50 Cent, the White Stripes, Was (Not Was) and the Black Crowes cranked until your ears bleed is perfect background music for the traditional glass ornament toss, where we all try to see how far away from the tree we can stand and still get the ornaments to stick in the branches without shattering on the wood floor when we throw them at the tree.

After all the ornaments are hanging or broken, we gather all the trimmings, tinsel and leftover wrapping paper in a pile, drench the tree with Grand Marnier and torch the whole thing in a towering inferno of brightly colored flames. Like I said ... Chestnuts roasting on an open fire ... I think it’s very important to set an example for the children, don’t you agree?

You say it’s your birthday
And I don’t think the fun should stop with the tree. On Christ’s birthday, as the sun rises, I traditionally get the ice cream birthday cake out of the freezer to let it thaw a bit while we all have a mimosa.

You know, I never realized it, but no matter how many multitudes we have over for birthday cake, there is always enough to go around. Sound fishy? Go figure. Then we gather for the ceremonial lighting of the candle. Now here’s where the arguments usually begin. You know, the "Is it one candle in the cake because it’s baby Jesus’ first year, or no candles because he’s just been born and won’t be a year old for a year yet," argument. Personally, I belong to the one- candle school. I mean really, what’s a birthday cake without a candle?

’Twas da night before Christmas
’Twas da night before Christmas, and all through the crib, we were both playing dress-up: I was wearing a bib.
Susan’s stockings had runs, but we just didn’t care,
Some like legs in nylon, I like my legs bare.
And while Kleo and our kitties purred sweet dreams of ham,
We toasted with champagne and cranked-up classic Pearl Jam.
When out on the lawn there arose such a racket,
I let go of her garters and put down the straitjacket.
Away to the window I blew in a flash.
I pulled out my Sig Sauer and stashed all my cash.
When what to my mascaraed eyes should appear, but a sled sheathed in leather and red Latex reindeer.
He was satin and lacy from his head to his foot;
he blew us both kisses, now how did that look?
He spoke not a word but went straight to his work, pulled out French lace and spiked heels, then turned with a jerk.
And laying a finger underneath his white-powdered red nose, said: "I’m old and I’m chubby and I wear women’s clothes."

Happy Holidays. And a moment of silence of those whom we have lost, either in mind, body or spirit in the past year.

Peace on Earth, Goodwill toward men. (Except Cheney and Rumsfeld, of course).

Michael Farver
Ex-print media publisher, amateur chef, passionate social activist, handler of championship Dobermans and licensed firearms expert, who travels the country following the Black Crowes while serving as a national, state and local spokesperson and advocate for childhood hunger solutions. I lead the board of Florida Impact, the state’s senior legislative public policy advocacy organization, direct a grassroots child hunger nonprofit in South Florida as well as a private consulting business that provides leadership development, social media, brand, marketing and other services. I'm into everything from modern art, tiki and pop surrealism to wine collecting to vintage guitars to all things touching, and touched by, technology. For starters.