skip to main | skip to sidebar

New Orleans: City Out of Sight, Out of Mind, But Not Out of Hope 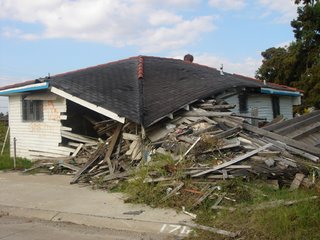 Crossing the bridge and descending into the 9th Ward on October 20, 2006 for me was akin to landing on the dark side of the Moon. Or dropping into a Dante's Inferno-inspired version of Hell on Earth. After 14 months, it appeared as if the storm had struck only the week before.

There are far too many words that come to mind to describe the devastation and destruction, the loss and sense of abandonment that envelops you like the clouds of dust, and mold, and grit that hang in the air as one by one, homes that were once filled with life are swept clear by bulldozers and backhoes and rendered barren, sterile and soulless.

In this vocabulary of loss two words in particular haunt me:

The first is "criminal". It is criminal that after 14 months, mile after mile of Lakeview and the 9th Ward neighborhoods are untouched by power, or sewage, or water service. It is criminal that no health care safety net of any type exists for the lower-middle class and poor. It is criminal that families still living in Houston, or Chicago, or Baton Rouge as evacuees are at risk of losing their property because they are not in New Orleans to protect and preserve it. And it is criminal that the task of reinventing one of America's great cities has been relegated to the back pages of our newspapers and taken off the agendas of the talking heads who instead fill our airwaves with smoke and clutter.

The second word is "determination." I saw it in the face of every New Orleanian I came in contact with during my work with Share Our Strength's Conference of Leaders; heard it in the words of every bellman and cab driver and average citizen who is fighting to reclaim their city; cried when told of the teachers at Martin Luther King School who have to spend their own money to make copies of textbooks to teach their students; bore witness to it in the actions of Mardelle Early and Pastor Charles Johnson and found hope in the thousands of volunteers with Common Ground and City Year and Share Our Strength and the hundreds of other organizations who have stepped in where governmental leadership has failed.

I'm going back in December.

Michael Farver
Ex-print media publisher, amateur chef, passionate social activist, handler of championship Dobermans and licensed firearms expert, who travels the country following the Black Crowes while serving as a national, state and local spokesperson and advocate for childhood hunger solutions. I lead the board of Florida Impact, the state’s senior legislative public policy advocacy organization, direct a grassroots child hunger nonprofit in South Florida as well as a private consulting business that provides leadership development, social media, brand, marketing and other services. I'm into everything from modern art, tiki and pop surrealism to wine collecting to vintage guitars to all things touching, and touched by, technology. For starters.